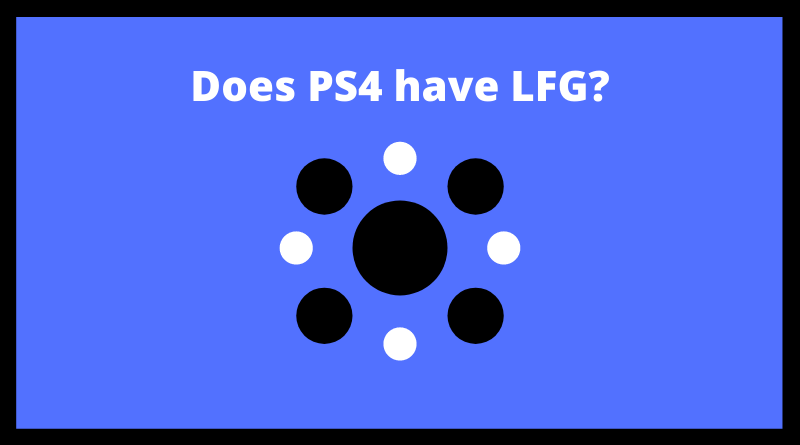 If you’ve ever chased a raid clear in Destiny on PS4, then you know just how important premade groups are. In fact, just about any team based multiplayer game is better with a squad.

How do you find the right group?

That’s where tools like looking for group (LFG) come in. Someone posts the kind of group their looking for, others join, and boom – a group is formed.

How do you go about this on PS4? Does it even support LFG?

Unfortunately, Sony’s system doesn’t support LFG natively, but there are a few workarounds to make your next gaming session less random.

Read on to find out why the feature is missing and what you can do to group up fast and efficiently.

Why LFG is missing

While Sony has knocked it out of the park this gen when it comes to games, major OS level updates and side features are things they have lagged behind with.

The PS4 is a video game console first and foremost, and it does it incredibly well.

So, why aren’t they continually adding new OS features?

It could simply be because they don’t really need to. Why invest development resources when your console tops the charts almost every month?

Conversely, the Xbox One has been on an uphill trek the entire generation, and Microsoft has been making pro-consumer choices in an attempt to turn the tide.

One area that the Xbox team has done exceptionally well is in regard to OS level features. For one, there is a native LFG tool available on the Xbox One. More recent system level features that have given way to Xbox praise are the additions of Game Pass, backwards compatibility, and Play Anywhere.

While features like these aren’t necessary to have a great time with the PS4, it would be nice to see Sony bring a greater level of parity in time for the next-gen consoles.

While there isn’t a native looking for group feature on PlayStation, making use of communities is the next best thing in terms of built in functionality.

PS4 communities are exactly what they sound like – hubs for like minded people to share screenshots and videos, make PSN friends, group up, and socialize with others.

You can think of them like a less refined version of Discord servers.

There’s bound to be a community for any interest – Apex Legends, Fortnite, fans of shooters, racing game enthusiasts…the list goes on. If you’re a fan of something, then there are probably others that are too.

If you want to group up with others, you’ve got 2 options:

As long as the community is healthy, you should be able to find other players without too much effort. If you are having trouble, there are tools outside of the PS4 ecosystem that are even better for queueing up.

The best outside resources for LFG

Sure, the PS4 has some cool ancillary features like built in Twitch streaming, sharing screenshots, and socializing with others, but sometimes using outside platforms is the superior experience.

LFG is one of the scenarios where you might want to use something other than PSN.

Discord is hands down the default platform for VoIP, chatting, and joining communities for PC gaming. The concept of traditional forums has largely been replaced by Discord for many types of gaming communities. Some PS4 players have even taken a liking to it over the built in PS4 party feature.

Hopefully, the next Xbox and PS5 will integrate the service into chat functionality, but console players can already take advantage of its powerful utility for grouping up.

A great way to find public Discord servers is by searching via disboard. You can also visit a game’s official subreddit and look for the community’s official Discord server (usually located in the sidebar).

Using specialized LFG sites is something I have experience with when I raided in Destiny. A myriad of options are a Google search away.

Search for a string like “your game” + LFG in order to find some of the more popular options.

This is probably the most direct method of grouping up as websites geared towards LFG are going to have forms for specifying exactly what you’re looking for – how many players you need, criteria you’re looking for, and the type of session you’re trying to have.

If you’re not an incredibly competitive player, it can be a little daunting, but with some digging you’ll be able to find players that want a chill session if that’s your speed.

Reddit is a sort of mash up of Discord and specialized LFG websites. Most popular games have a subreddit dedicated to LFG, and some of those will have threads for finding friends.

The official PS4 subreddit is one in particular that offers threads for finding new PSN friends. There’s a friend finder thread posted every week for players to post their PSN name and the games they play in order to give others a general idea of what they’re into.

You can even find a subreddit dedicated to making PSN friends at /r/PSNFriends.

Popular group based games like Fortnite, Apex Legends, Destiny, The Division 2, and others also have their own subreddit dedicated to LFG. In most cases, the subreddit will also link out to a Discord server.

Some PS4 games, like Overwatch, even feature in-game LFG.

The speed at which you’ll be able to group up and make friends is generally going to be slower than Discord or dedicated sites (sometimes painfully slow), but it’s worth trying out as a tool among many. As mentioned, it’s also a great way to find dedicated Discord communities which move at a much faster pace.

Despite the impression you’ll get from some of the biggest channels, Twitch can serve as another useful tool for finding a community. I only periodically watch Twitch streams for high level and new gameplay, but I’ve found that smaller channels tend to bring a community vibe that lends well to grouping up.

Smaller Twitch channels not only let you get more familiar with the streamer, but also other viewers. Naturally, viewers are going to be just as interested in the game being streamed as you are. And best of all, most streamers offer an official Discord server to further flesh out their community.

As gaming continues to become more and more ubiquitous, social interaction grows, evolves, and thrives. We can only hope that next generation consoles like the PS5 will adapt to this new landscape (Discord please!), but third party tools in place today ensure that grouping up is only ever a few clicks away.