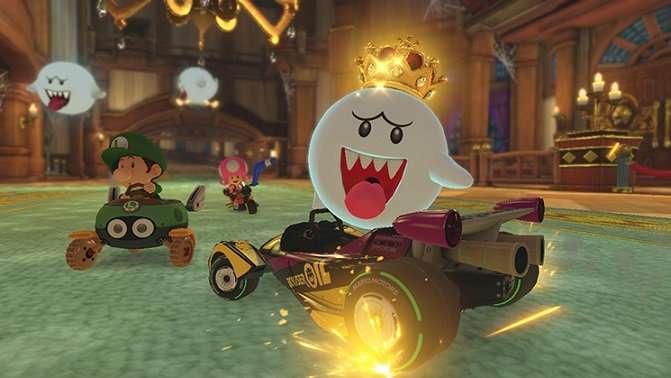 Is Mario Kart 8 Deluxe Worth Buying?

You’ve graciously power slid, countered Red Shells, and made use of one or two short cuts in order to power on from the back of the pack to 3rd place.

Mario hasn’t let you down thus far, and that beam of focus let’s you know that 1st place is only a matter of time.

The two players in front of you don’t seem to have gotten there by way of skill. They’re faltering on their slides and generally out of the bounds of the Mario Kart flow.

You’ve actually got this.

It’s too bad that in that moment luck just wasn’t in your favor. Moments after, you were zapped, lost your items, held it together for a few seconds, but were ultimately stomped by a whizzing Bullet Bill and Red Shell 10 seconds within each other.

As the general flow of Mario Kart would have it, you’re now in 8th place with no chance at improving.

And this is the chaotic, nonsensical, and simple fun that never fades in Mario Kart 8 Deluxe (or really any entry for that matter).

Mario Kart 8 Deluxe stays true to this mantra, and allows you to hop in and out with ease. The hybrid nature of the Switch makes the experience all the more enjoyable with the ability to not only play on the big screen, but also lounge around in bed via the undocked handheld mode.

But what about the new? What does Mario Kart 8 Deluxe do differently than the Wii U version?

One of the biggest differences concerning Mario Kart 8 vs Mario Kart 8 Deluxe is the number of tracks available in the game.

You also won’t have to worry about any unlocking as all 48 tracks can be fired up right from the start.

In Mario Kart 8 Deluxe you’ll be getting 3 new vehicles in addition to all offered in the Wii U version.

The new vehicles include:

Just as with the tracks in Mario Kart 8 Deluxe, all of the playable characters are unlocked from the get go (except for a special variant).

The Switch version offers a total of 6 additional characters over the Wii U version. The new characters include:

Wondering how you can unlock Gold Mario in Mario Kart 8 Deluxe? It’s very simple – beat the 200cc Grand Prix and come in first place. There’s no grinding, no convoluted progression system, and no amiibo required. Simply best the hardest single player content in the game and Gold Mario is yours.

The difference between Mario Kart 8 and Mario Kart 8 Deluxe when it comes to Battle Mode is absolutely staggering.

There are 4 new modes and 8 new tracks for the new and improved Battle Mode, making it an entirely different beast from its predecessor.

The new modes include:

And the the new tracks are as follows:

There are only 2 new items in Mario Kart 8 Deluxe, Boo and the Feather, but there’s a big meta mix up of sorts with the ability to carry two items at once.

As a result, you’ll also find item boxes that offer 2 items at once. They’re regularly fought over, but they’re there.

The above changes are some of the biggest alterations available on the Switch version of Mario Kart 8, but there’s a few more minor miscellaneous and quality of life changes worth noting.

They are as follows:

Of all these changes, Smart Steering is probably the most game changing. It makes it much easier for newcomers to the series and non-gamers alike to enjoy the game. Smart Steering essentially steers for a player when they’re due straight for a wall, cliff, or any other track obstacle.

Mario Kart 8 Deluxe offers a laundry list of changes from its predecessor, offers fully functional portable play, and is an evergreen video game in terms of its constant propensity for enjoyment.

Whether you’re new to the series, a returning veteran, or simply want to add to your growing Switch collection, Mario Kart 8 Deluxe makes a very strong case towards being your next gaming purchase.

In a word, it’s a game that’s incredibly easy to sit back and relax with. There’s no pretense, only fun (and frustration).