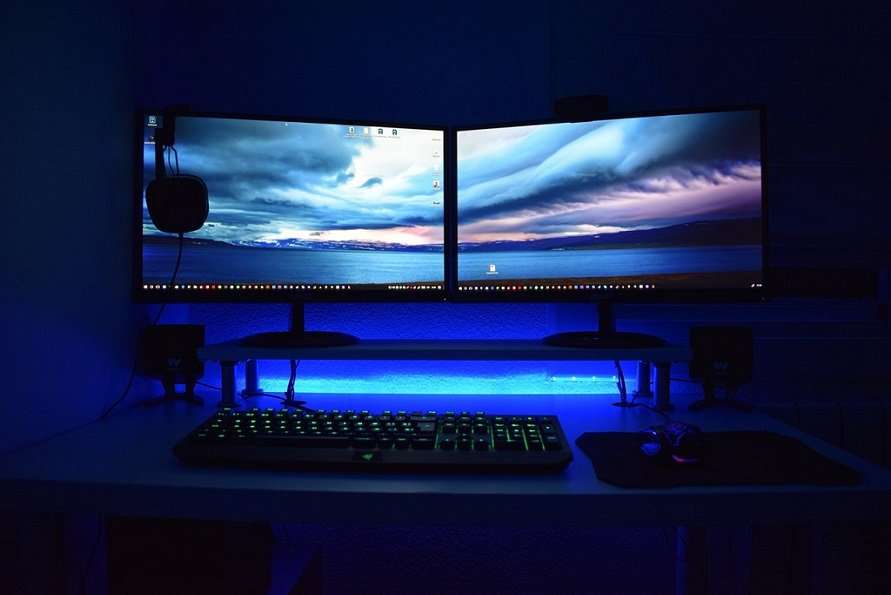 One of the biggest draws to PC gaming is flexibility, and among a player’s options to configure the display output is the ability to game on a dual monitor setup.

Monitors are essentially stacked side by side in order to create a much wider, and subsequently more immersive, field of view. It’s features like this that make the PC landscape one ripe with possibility for tech enthusiasts.

Slowly but surely PC gaming features have been sliding into the scene of console gaming, but for the most part, PC is far and away the place to be for the cutting edge.

If you’re playing on the PS4, you might be wondering – does the PS4 support dual monitors?

In short, Sony’s console lacks dual monitor capability (as do the Switch and Xbox One). If you want true dual monitor support, then you’ll need to buy a gaming PC.

Read on to learn about PS4 features that are similar to dual monitors and how you can integrate the console into an already existing setup.

The PS4 and a proper desktop PC are inherently different in that computers have the ability to integrate dual video outputs into the GPU.

With the PS4, you are only able to output via one HDMI cable. This also applies to the Nintendo Switch and Xbox one, as both are also incapable of dual monitor setups.

When a PC outputs 2 separate feeds it is not merely duplicating an image, but rather creating two instances of graphical outputs that are relational to one another.

And while it is technically possible to output to multiple monitors via a single PC output, a technique called daisy chaining, video game consoles lack the output required – DisplayPort 1.2.

Consoles are simply behind in both hardware and software capability, but this is also what makes them so streamlined – no nonsense gaming.

A splitter is not a solution

HDMI splitters offer a way to duplicate displays, whether outputting to TV’s or monitors, but they are not the ticket to a dual monitor setup.

Unfortunately, a splitter merely duplicates and does not create a dual display setup. A native setup on a PC allows users to extend a single screen (the Windows desktop for example) across multiple screens.

True multitasking and micromanagement to your hearts desire.

While not a solution to a dual monitor setup, remote play is an awesome PS4 feature that lets you extend your screen to either your PC or Vita.

It’s a way to stream gameplay directly from your PS4 to your PC/Vita either locally or roaming.

This often overlooked feature is a great way to free up the main TV so that your girlfriend/family/roommates don’t have to deal with you hogging up the living room.

The PS4 does need to remain powered on, but you are able to switch inputs during an active remote play session.

HDMI splitter: integrating the PS4 into your PC setup

Looking to add a PS4 to a single/dual monitor gaming PC setup?

If you already have your desk set up in such a way that all HDMI inputs are taken up by your PC, other consoles, or any other display devices, an HDMI splitter is the perfect remedy.

In some cases, an existing dual monitor setup can make it tricky to game on a PS4, Xbox One, or Switch and use a PC at the same time. An HDMI splitter fixes this issue by allowing you to toggle between HDMI inputs ultimately outputting to a single monitor.

You could theoretically run your PS4 in party chat playing Apex Legends with friends and switch back and forth between your dual monitor desktop to browse in between games.

Putting it all together

The moral of the story is that, even in 2019, the place for dual monitor support is still a gaming PC.

The PS4 lacks additional inputs to make this kind of setup possible, and those wishing to solve the problem by adding an HDMI splitter to the mix should know that the technology merely duplicates the display.

A true dual monitor setup allows a screen to be extended across multiple displays.