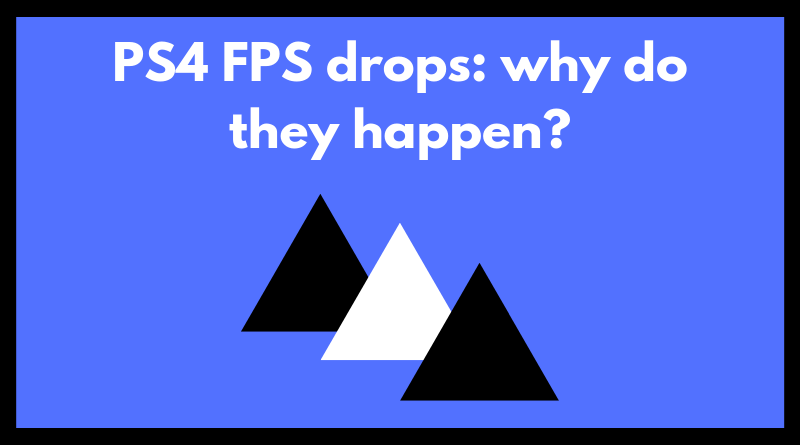 You’ve just wrapped up a rough day and all you want to do is kick back with your PS4.

And then it happens – your frames start dropping.

There’s no escaping the constant stuttering and dipping, and more importantly, it’s driving you absolutely insane.

Why does the PS4 suffer from FPS drops?

There’s a multitude of reasons why the PS4 suffers hits to performance, but the biggest by far are:

Relative to its age, Sony’s console is capable of producing some incredible looking games, but there’s a reason the company opted to introduce the Pro revision this generation.

Optimization is what allows blockbuster games to ship free of bugs, and it’s also a large component of determining the frame rate of a game.

Unfortunately, more and more games are shipping before receiving a final level of polish, and the staggering complexity of service driven games makes maintenance a nightmare for even veteran developers.

Games like Anthem and Fallout 76 are two prime examples of what rushing to market ultimately delivers.

Both are ambitious in theory and poorly executed as a means of capitalizing on player spending, and both cut at the knees in terms of polish and execution.

Developers have an easier time developing for consoles like the PS4 due to a small amount of SKUS, but ironing out performance related kinks is always a matter of resource spend (time and money).

It’s largely going to depend if the developer is:

Sony’s first party developers not only have the luxury of developing for one console, but also the intimacy and resources surrounding the platform itself. The company even provides its worldwide studios with an in house graphics technologies unit, ICE Team, as a means of making the most of production.

And while ICE Team no doubt spreads its reach to third party developers, the prioritization of first party titles is obvious when the likes of Horizon Zero Dawn, God of War, and Spider-Man have produced some of the most technically impressive experiences in the industry.

AAA developers like Ubisoft and Bethesda may have the resources to dial in on performance, but they also need to port games to both other consoles and PC. Big budget games are usually incredibly ambitious in scope as well, making the final push for optimization that much more of a balancing act between available resources and ROI in the market.

The majority of indie developers don’t have nearly as much money to devote to any particular game, but then they’re also not offering up sprawling open worlds or dozens of interconnected systems as AAA titles do.

At the end of the day a game’s frame rate is heavily reliant on the developer’s vision and talent, and even the most ambitious titles sometimes offer excellent performance, but the realities of modern output will always benefit or constrain the final product in some manner.

There’s no getting around it – the PS4 is on its way out. The base model still produces some incredible looking games, but it’s beginning to show its age, and its successor is no doubt right around the corner.

Sony came out of the gates with the more powerful console in 2013, but both the Xbox One and PS4 launched with under powered CPUs at the onset. And as these consoles approach 6 years on the market, it’s only natural that many games suffer from FPS drops in some capacity.

Although the base PS4 has arguably aged more gracefully than the PS3 and Xbox 360, it’s evident that many are more than ready for the PS5 and its promise of better performance. It’s the reason why Sony and Microsoft offered more robust versions of their respective consoles during the halfway point of this generation.

In my own experience, I’ve found that games like Battlefield V and PUBG are perfect examples of showing the PS4’s age. Battlefield V, while perfectly playable, suffers from micro stutters and FPS drops relatively often when chaos ensues.

PUBG tends to have issues on all platforms, but the console versions show that its a bit beyond what they’re packing.

I’ve even found Apex Legends to suffer from FPS drops intermittently and absent of anything particularly demanding. And although Bungie tends to excel at polish, Destiny 2 also faltered when Public Events turned exceptionally chaotic.

Sure, some of this is down to optimization, but a common thread seems to be that the base PS4 buckles when dynamic scale is thrown at it.

For as much as we rely on networking with modern games, it’s easy to wonder – do lag and ping affect FPS?

While a poor internet connection can mimic the effects of frame rate drops, the two are distinct and separate.

Things like rubberbanding, hitching, and stuttering are all things that can appear to be FPS drops at a glance, and it’s quite easy to mistake the two.

A high ping in particular delays the response between your actions (client) and the server’s (host) ability to contextualize and serve them to others. If you’re playing with others who have a high ping, it makes it hard to properly engage with them.

Mix in a poor networking environment in general and you’ll sometimes find yourself or others skipping from point A to point B with no visible path in between.

So, how can you tell the two apart?

The main difference between the two is that FPS drops stem locally from your PS4 while lag spikes, desync, rubberbanding, and so forth are a mixture of your internet connection and the server hosting the game. Generally speaking, FPS drops are going to affect your field of vision and sense of control while lag spikes will influence instances of players and objects while gaming online.