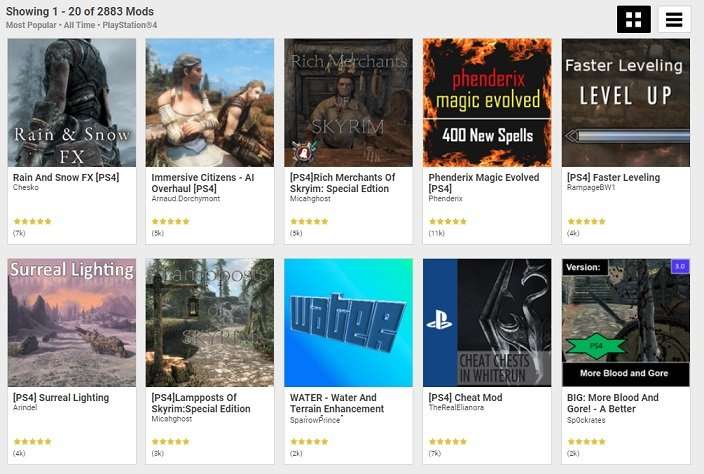 Modding is a feature of video games that has traditionally had its roots on the PC platform, but recently, it has transitioned into a couple games on the PS4 and Xbox One.

Some of the most influential PC titles with modding date back to the early 90’s, with games such as Doom, Half Life, and Team Fortress leading the pack.

Quick note on PS4 modding: The games below handle modding as easily as consoles handle games – that is, plug and play. There’s no hacking involved, no game save modification, no homebrew, and no jailbreaking. All you will need is your PS4 and an internet connection.

On the PC side of things, Skyrim continues to stay relevant on Steam’s daily users charts because of its compelling open world freedom and, of course, its staggering amount of mods.

It’s a game that PC players often take modding to the point where the end result is a plethora of errors, or worse, a system crash. When the carrot on the stick is nearly unlimited possibilities on top of an already open ended game, who can blame players that run 10’s or 100’s of mods?

And luckily, with the release of Skyrim Special Edition on consoles, mods have finally opened up to PS4 players. No, you’re not going to find some of the most insane mods available to PC players, but there’s still plenty of room for tweaking and tuning.

Here’s just a few of the most popular mods on PS4 at the moment to give you a taste:

Here is a complete list of mods for Skyrim on the PS4.

These are just a few of the more popular mods on the PS4 deemed best by players. All together, there are nearly 3000 Skyrim mods available to PS4 players.

There’s bound to be a mod, or a collection of mods realistically, to suit all types of Skyrim players. Everything from quality of life tweaks to complete overhauls are at your fingertips, ready to que up and download with ease.

The fifth installment in the Elder Scrolls series was initially released 6 years ago, and there has been no better time to hop into the vast fantasy world, with Skyrim Special Edition enjoying deep discounts on both the PS4 and Xbox One.

Another PS4 game with mods also happens to be a rich open world RPG by the developers over at Bethesda.

If you’ve been out of the loop, Fallout 4 is a first person/third person shooter which takes place in a post apocalyptic, open world Boston.

While Skyrim has you pitted against your typical high fantasy opposition, Fallout 4 throws you deep into the radiated mix of mutant creatures, raiders, and an inorganic enemies akin to Battlestar Galactica’s Cylons.

But while the settings and enemies may differ, Fallout is like Skyrim in that exploration and complete freedom in said exploration is the name of the game. There are main quests and side quests, of course, but doing what you want, when you want, is a hallmark feature of the game.

This level of freedom and potential for tons of replay value is further enhanced with the inclusion of mods on the PS4. Here’s a quick list of some of the most popular modding options available to PS4 players:

Check out the complete collection of Fallout 4 PS4 mods here.

Fallout 4, like Skyrim, is the perfect open ended game to alter in a million different ways with mods. And with the addition of modding on the PS4, the sky is the limit in terms of replay value.

At the time of this article there are just about 2500 mods to play around with on the console. And the game has been out for 2 years so many of these mods have had time to mature and work out kinks and bugs.

Like Skyrim, the game is also heavily discounted these days, even the Game of the Year version, so now is the perfect time to pick it up.

We’ll be sure to include more PS4 games with mods as they become available. Check back with Click Press Play for all things games, media, and tech.