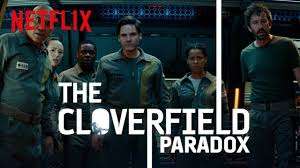 The Cloverfield Paradox is a movie that emphasized the historic nature of Superbowl Sunday, not because of quality, but rather an immensely novel handling of a Netflix exclusive release.

The cryptic trailer for the third installment in the Cloverfield series released during the game and, while as frenetically stitched together as prior installments, sought a much loftier benchmark for its typical flash bang marketing.

Eagles, Patriots, and middling fans alike were subjected to what, at first glance, seemed to be a sci-fi fairing space expedition filled with hallmark mystery and malicious underpinnings. At this point, the mystery of the Cloverfield marketing machine has become as enthralling as the movies themselves for fans.

The Cloverfield Paradox, formerly known as God Particle, reportedly cost Netflix over $50 million according to The Hollywood Reporter, and although it has been slammed by critics, still remains to be a landmark moment in the soaring business of streaming.

While only offering a cursory form of entertainment, The Cloverfield Paradox still manages to capture the feel of a traditional movie theater release. It has excellent production value and a great cast, but unfortunately, the backbone of the movie, writing, fails to tie the room together.

And yet for all of the cheese and lack of nuance, I still believe that this is a historical moment for Netflix and streaming as a whole. We still don’t know how this experiment panned out for Netflix, but I would be hard pressed to find out that a huge chunk of its 118 million subscribers didn’t succumb to a marketing campaign as poignant as this.

In my eyes, this is the start of a new ancillary approach to original content for Netflix, and possibly other services like Amazon Prime Video and Hulu. In home streaming is more akin to a lifestyle change on the media front than it is a fad at this point, and releases like The Cloverfield Paradox, which would most likely flop at the box office, are perfect for companies like Netflix who seek to systematically appease all demographics.

Despite what critics say about the movie, a lot of people have no doubt found some enjoyment during their viewing, and are even discussing it on places like reddit. I even managed to derive a little enjoyment out of the movie, even with its bountiful misdirection, leaps in logic, and less than stellar writing, and I genuinely can’t wait to see how Netflix and others evolve this approach over time.