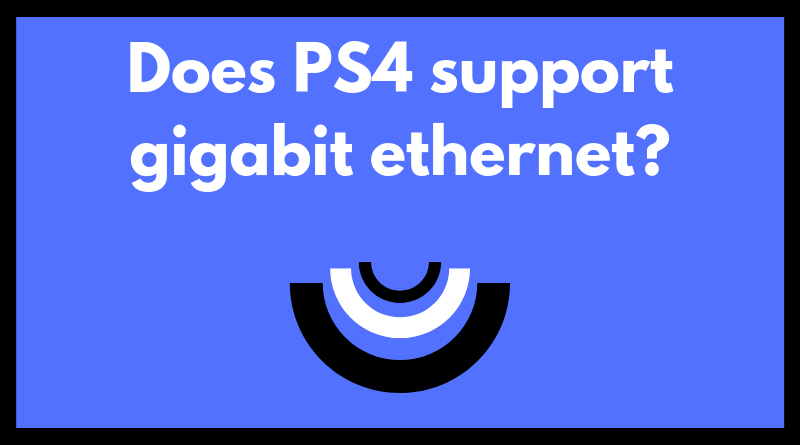 As the graphical prowess and overall complexity of PS4 games grows, install sizes continue to soar. It’s not unheard of for games to push 60 gigabytes, and with constant patches, it can feel like you’re downloading more than playing.

Internet speeds are more relevant than ever, with more and more individuals investing in higher tier plans from ISP’s to support a constant influx of downloads, Spotify, Netflix, and online multiplayer.

Some have even gone so far as buying into gigabit internet with providers like Google Fiber and Verizon Fios.

Which brings us to the crux of console networking:

Does the PS4 support gigabit ethernet? Can it fully take advantage of a lightning fast fiber connection?

Technically, each model supports the standard but there is a catch.

PS4 gigabit support: yes and no

The PS4’s support for gigabit ethernet is two-fold – it does technically support the networking standard, as per the console’s specifications, but the real world results prove otherwise.

If you’ve ever performed a speed test on your PS4, you’ve probably noticed that you’ll get slower speeds than what your connection is rated.

For example, I have a Verizon Fios plan that is rated at 100 megabits download and upload, but I’ve never actually seen this achieved with the speed test on the console, even when making the switch to 5GHz on my Slim.

Conversely, if I test my speeds via Fast.com (Netflix’s speed test website) on my desktop or OnePlus 6, the results show my true speeds without fail (as long as not tested during “internet rush hour”).

You will still have the potential to reach hundreds of megabits per second on your console, but it’s rare to reach max speeds on the PS4.

If you happen to own an Xbox One or gaming PC in addition, you may have noticed that game and patch downloads are significantly faster through Xbox Live and storefronts like Steam on PC.

For whatever reason, PSN trails behind in this regard.

Remember, you can potentially increase your download speeds through PSN by:

Anytime I’ve downloaded something on the Xbox or PC I’m instantly reminded of what should be on the PS4 (not to mention the slow performance of the PSN store itself).

The reason for the PS4’s lackluster performance could be a variety of things – a less than optimal CDN deployment, the locations of Sony’s servers, or simply inferior networking hardware.

Whatever the case, hopefully Sony addresses the shortcomings of PSN before the launch of the PS5.

Digital downloads continue to grow in popularity, patch sizes and regularity are soaring, online multiplayer is increasingly robust, and we are now at the precipice of game streaming (PlayStation Now, Google Stadia, GeForce Now, and so forth).

The reality of the situation is less thrilling than what marketing would have you believe, but in an era of 4K gaming, TV shows, and movies, the upside of it all is a little exciting.

5G is little more than a pipe dream at the moment, but gigabit internet is available today from providers like Verizon, Comcast, and Google.

Sure, a 100 Mpbs connection can handle most applications thrown at it, simultaneously even, but capitalistic growth ensures that internet speeds will be the bottleneck to media, especially gaming, at an increasing rate.

It’s not outside the realm of possibility that next gen games will regularly surpass 100 GB.

The move to gigabit is a move of eliminating overhead – hours of downloading and redownloading games, days of waiting for online orders, wasting gas to shop in store, and making sacrifices for simultaneous streaming.

And that’s not including the insane bandwidth costs of streaming games – a way to play sure to take off in some capacity next gen.

It’s all here today in some sense, but a refinement in networking next generation means that those on the Sony side can actually take advantage of it.