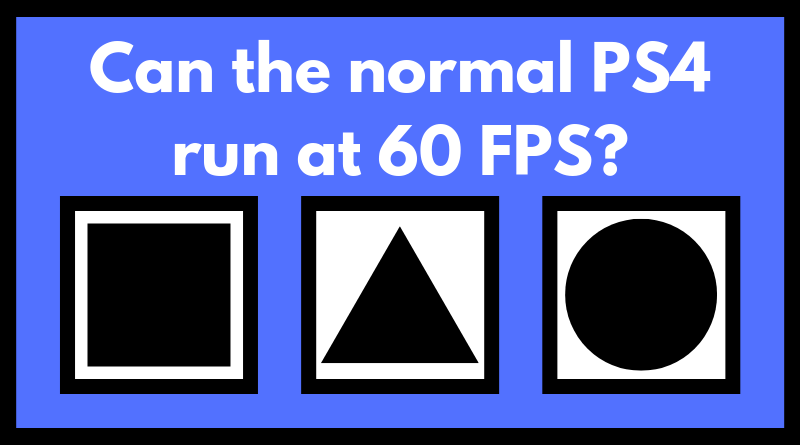 It wasn’t all that long that the FPS of games was a foreign concept to the majority of gamers, but after the overwhelming success of titles like Call of Duty on consoles it’s become a mainstay in discussions.

If you play games on a regular or Slim PS4, you might have noticed that Sony is doing things a little differently this time around. For those that want it, a new, more powerful console is offered with the PS4 Pro.

And with all of the new marketing buzzwords since its inception (HDR, 4K, Ultra HD, and so forth), it’s sometimes hard to know what the original model is truly capable of.

Can the normal PS4 run 60 FPS? Does the Pro really offer a significant boost?

It turns out Sony’s aging console still has a lot to offer on the performance front.

First off, the base model is plenty capable of running games at 60 FPS.

There are, however, some caveats:

As long as you’re not incredibly annoyed about a variance in FPS, there are some awesome games that can hit the number the majority of the time.

Not all developers place performance over visuals, but the push for 60 FPS has gained a fair bit of traction on all consoles this generation.

A prime example of a developer’s vision trumping raw power is seen with the Switch.

Compared to the regular PS4/Slim, the Switch is incredibly weak, and yet, games like Mario Kart 8 Deluxe and Super Smash Bros. Ultimate run at 60 FPS near flawlessly.

Despite what some might tell you, you simply don’t need a monster gaming PC with an i7 and RTX 2080 to have a smooth gameplay experience.

Some of the most popular games on the market right now run at 60 FPS – games like:

Sure, you won’t be able to play God of War, Spider Man, or Red Dead Redemption 2 at a high frame rate, but then, these are some of the best looking games out there.

You will need to accept some compromises – many games will stutter when a game becomes resource intensive – but the experience isn’t all that bad considering the age of the base PS4.

Pro has it on lock

If you find semi-consistent frame rate dips like a match set ablaze to your irritability, then the PS4 Pro might be right up your alley.

It won’t offer a 60 FPS guarantee, but it will provide a much more consistent frame rate over the base model and an option for performance over visuals in many titles.

Sony even offers something called “boost mode” for games that don’t have an official Pro patch, a sort of addendum to PS4 games that allow the Pro model to shine.

Generally speaking, the “PS4.5” is going to be worth it if:

Just keep in mind that it’s likely we will see a PlayStation 5 inside of 2 years from now.

Not only will the beefier console make games look better, but it can also serve as a great media device for Ultra HD streaming.

Frame rates over 30 FPS not only increase perceivable fluidity, but can also improve player control through a decrease in visual latency.

And so, the million dollar question is this – why don’t all games run at 60 FPS?

There’s no denying that multiplayer games running at a higher frame rate feel and control better, even when compared to games offering a hard locked 30 FPS, but the balance between performance and visuals is one of compromise.

In the case of consoles like the PS4, doubling the frame rate from 30 FPS is incredibly taxing to the overhead of comparatively weak hardware. It’s one of the reasons that those more invested in the PS4 ecosystem look to the Pro.

More importantly, it’s much easier to demonstrate why consumers should buy your game if it’s something that looks incredible graphically. Frame rate is quite hard to convey with marketing, and not all are receptive to the increase in performance.

And while games like God of War, Spider-Man, and Red Dead Redemption 2 technically could run at 60 FPS, they wouldn’t be nearly as visually impressive.

On the PC front, these sorts of limitations are shattered provided you’re willing to compromise on graphics and/or have a suitable budget. Unlike the Xbox One and PS4, PC players can dial in settings – everything from anti-aliasing techniques to texture detail – in order to strike the perfect balance between looks and performance.

The best part about graphical tuning is that it applies equally to weak and powerful machines. In my own experience, I’ve been able to squeeze out a near constant 60 FPS with PUBG on my Acer Nitro 5, a budget laptop with a 1050 Ti.

It’s unfortunate that this kind of freedom eludes the PS4 and Xbox One, but then it would most likely compromise the vision of consoles themselves. Hopefully, the inclusion of components like the Zen 2 CPU in the PS5 means that the push for higher frame rates will roll into the next generation.