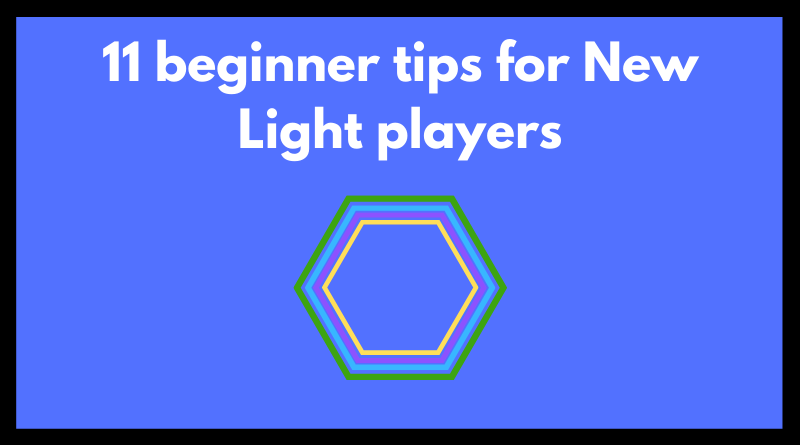 With the launch of New Light, Destiny 2 is arguably in the best state it’s ever been in.

Unfortunately, it also boasts the highest barrier to entry for those jumping in for the first time.

There’s no wide reaching tutorial in game, players are faced with dozens of missions to do, and contextualizing the flow of progression can be maddening.

I’ve been with the series since its inception and even I’ve been having difficulties acclimating to all changes.

Below are some helpful tips I’ve gathered through experience with the franchise, experimentation, and poor decision making during my first 30 or so hours with New Light.

If you’ve recently downloaded the free to play version of Destiny, you might have noticed that there’s an option to boost your character’s power level to 900.

Early leveling provides much needed exposure to the game’s systems and the climb itself is very easy.

Reaching the soft cap of 900 can be done in days if you’re hopelessly addicted and within a week when played casually.

Among the sea of blue loot you’ve finally come across a shiny purple engram. It’s purple so naturally your brain lights up.

The thing about blues is that they’re well worth using when leveling on the road to 900. Using a lower level legendary weapon is fine because many rare equivalents handle like garbage, but blue armor is going to do the job 99% of the time.

Above all, do not infuse before you reach 900 and never infuse blues. Sooner or later, you will learn the worth of one particular type of material. 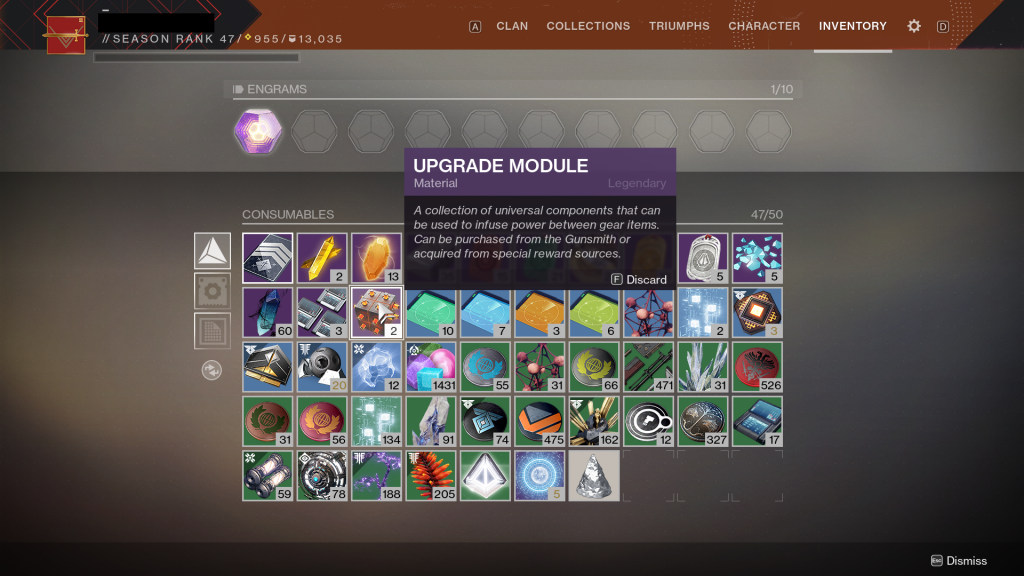 This brings us to Upgrade Modules. This type of material is equal parts scarce and necessary in end game (at least, at the onset).

You’ll never want to use these before hitting 900 and even when you do it’s ideal to hold out for as long as possible before infusing a piece of gear.

Say you’re a fan of a scout rifle like Night Watch. You like the feel, perks, and aesthetics. If it happened to drop at say, 890, it would be best to use it without infusing until the upgrade is decently substantial.

It makes more sense to jump 10 or more power levels than to burn Upgrade Modules every 2 or 3 increments.

If you play it smart, you should have Upgrade Modules when you need them and using under powered gear won’t impact you too much if you regularly play shooters. It’ll only require a whiff of stinginess.

Before you head off into the unknown it’s best to make a quick pit stop at the tower.

Many of the NPCs will dish out quests that will either reward you with useful gear and materials or help you unlock the modes released over Destiny 2’s life.

Unlocking quest lines early on means that you won’t inadvertently miss out on progress and put a cork in your progression.

It’s something I know all too well since I skipped out on inquiring with Benedict and subsequently delayed opening up The Menagerie, one of the coolest activities available to New Light players. 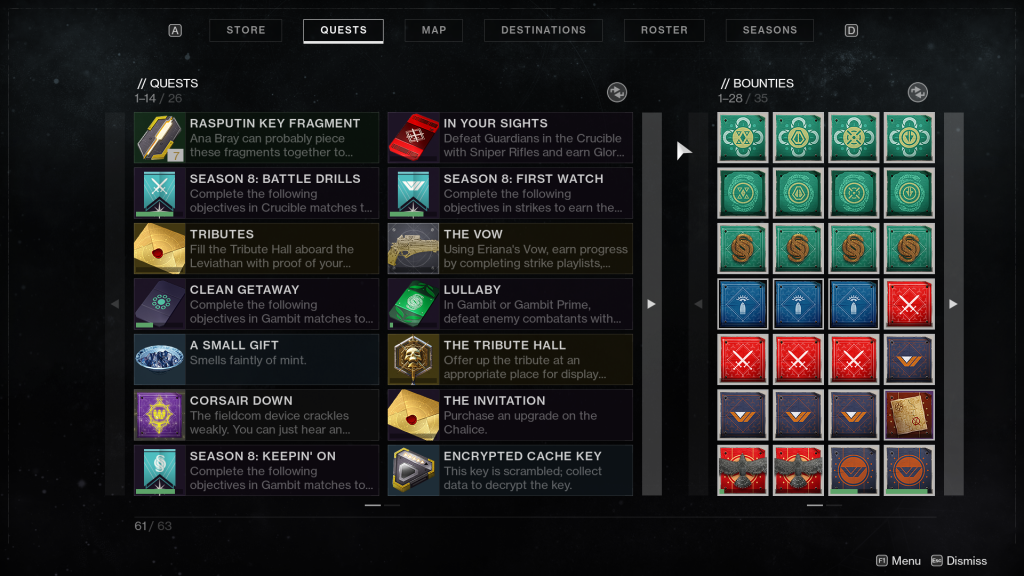 One QOL change to new light that stuck out when starting again was the absurd amount of bounties you can hold.

And if you want to keep threading the needle you’re going to want to stack as many bounties as you can hold.

They’ll help you gather materials, currency, gear, and progress with the season pass (there’s a free track available to everyone).

Some, such as though available via Iron Banner, offer Pinnacle Rewards which provide the biggest boosts to power level.

I personally like to prioritize those which I know will be relatively painless to complete but the available inventory space means you’ll never have to be too picky.

Make sure to prioritize weekly bounty goals for Crucible, Vanguard, The Gunsmith, and Gambit as they’ll all drop powerful gear.

From Apex legends to Fortnite, it seems like every live service game includes a battle pass. Destiny 2 is no different this go around.

Before you roll your eyes, it’s worth noting that even New Light players can take advantage of this new swing at monetization.

In fact, it’s in your best interest to regularly redeem rewards as valuable materials and currencies are included.

At a certain point you’ll even be able to snag an exotic hand cannon (Eriana’s Vow), and it’s also your best bet for transmog without spending real money (nostalgic bright engrams).

Simply open the director and navigate to the right most tab labeled season.

No need for power

Rocking a full set of blues in hopes of attaining more powerful drops?

If you have an under leveled legendary or exotic that you vastly prefer, you’ll be glad to find out that higher level gear will drop as long as it isn’t dismantled.

This wasn’t always the case, but at a certain point Bungie wised up and made the climb of progression a tad more intelligent.

Rare gear certainly has its place, and in many ways is the backbone to leveling, but it’s usually infinitely less fun to use.

The franchise has never been better when it comes to build diversity and tailoring the game to your playstyle.

Random attributes on armor pieces means that you can spec your character for faster grenade recharge, supers, class abilities, and so forth.

Mods take this one step further by allowing you to further build out a particular stat.

I’ve found that creating a constant supply of grenades by building towards Discipline and using a grenade regenerating auto rifle makes for a good dose of chaos.

Not sure where to start?

Hover over each stat symbol in your inventory screen to learn what each stat does. From there it’s a matter of finding random rolls and mods that cater to your preferred stat.

Frustrated by a lack of Exotic drops?

Destiny regularly offers a world vendor, Xur, who sells Exotic weapons and armor in exchange for Legendary Shards. If you’ve got the stock, you can even purchase a Fated or Isochronal Engram that only rolls Exotics you don’t already own.

You can find Xur starting on Friday of each week at varying destinations. Where is Xur is a great resource for finding out where he’s located, what he’s currently selling, and how much longer he’ll be around.

While cut off from a large portion of loot, New Light players have access to a healthy collection of legendary and exotic drops.

A lot of what you’ll find in Destiny 2’s current form are questlines for attaining new weapons, and the trigger for most of these are as simple as visiting NPCs in the tower.

Below the bounties for a vendor you’ll find available pursuits along with the requirements for each. Most are preceded by exotic quests that are only available to those with access to Forsaken and Shadowkeep.

If you weren’t already overwhelmed by your quest log, chasing legendary weapon quests is the best way to add to objective overflow.

The most important thing to keep in mind as a newcomer is that nearly everything offers rewards.

Engrams, drops, glimmer, currency – as long as you’re picking up bounties there’s no need to stress about efficiency.

Destiny 2 is still maintains some of the best gunplay in the industry and at this point in the game’s lifecycle there’s something for everyone.

Do yourself a favor and put the obsession with the stat grind on hold until the progression turns into more of a trickle.

Unless you’re playing the game’s hardest content, you’re going to find that you can do a hell of a lot with builds rooted in fun rather than what the meta calls for.